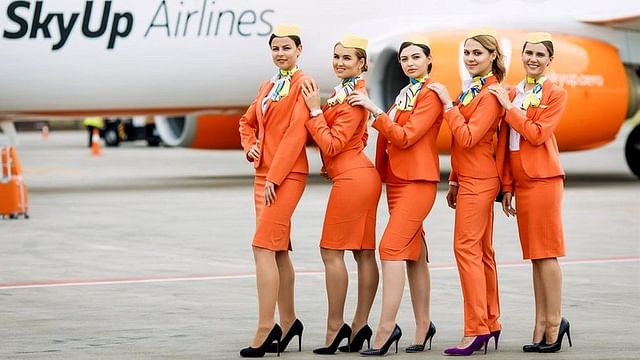 For decades, various airlines around the world have been trying to present female employees as physically attractive for the purpose of business expansion.

Different organizations have introduced all the difficult obligations with uniforms or specific clothing. They are being forced to wear high heels and tights. Employees often have to give up on their comfort. Besides, they are facing various health risks. This time, for the convenience of women workers, the authorities of Ukraine-based Skyup Airlines are going to relax the rules of wearing clothes.

According to the BBC, the Skype Airlines authorities recently conducted a survey on the likes and dislikes of their female cabin crew. It shows that women workers are not happy with their obligation to wear high heels, tights and pencil skirts. In such a situation, the company has decided that the old style clothes will be canceled from next month. Instead, cabin crew can wear new and comfortable clothes. They don’t have to wear high heels.

They will be able to wear loose jackets and trousers instead of pencil skirts.
Mariana Grigoras, head of marketing at Skyup, said: It’s hard work. We understand that female flight attendants do not want to be allowed to present themselves as objects of sexuality and amusement.

Daria Solomenaya, a 26-year-old flight attendant at Skyup Airlines, said: Then the condition of the feet becomes such that it is almost impossible to walk. ‘He added,’ Many of my colleagues have to seek regular medical attention. Toes and nails are constantly being damaged due to wearing high heels.

Daria thinks working out after heels and pencil skirts is definitely not easy. Citing an example, he said that in case of an emergency landing, an attendant has to run to open the door on the wing of the aircraft. All the passengers then lined up and waited to get out. In such a situation it is difficult for a female cabin crew to move forward through the corridor. Then he had to get on the seat of the plane and go to the front. In that situation, he thinks that it is not possible to do it with tight clothes like heel shoes and pencil skirt.

“Imagine how I’d do it after the pencil skirt,” said Daria.

Similarly, high heel shoes cannot be worn in case of emergency landing. And that is why in such a situation one has to work barefoot under strict security rules.

It’s not just the old airline uniforms that seem unrealistic in case of an emergency landing. Such situations may also be encountered when operating irregular flights through regions with varying times and climates. As soon as such a flight starts, all the eyes of the passengers are on the flight attendant. That’s when you have to give passengers an idea of ​​what to do in an emergency.

In such emergencies, Daria said, life jackets, masks and belts are sewn down as passengers sit in the seats and have to be pulled down one by one when needed. If you are wearing a pencil skirt, it becomes difficult to sit down like that.

Gelena expert Olena Strelnik said the female cabin crew is presented a little more as a general reflection of sex and femininity than other subjects.

Ukraine was no exception. But in the last few years, Ukraine has changed dramatically. Olena Strelnik believes that many of the most discriminatory practices against women in the country are beginning to come to an end. This is not the first time that airlines have changed uniform policies in Europe. However, this is the first such incident in Ukraine.

While SkyUp has changed its uniform policy, it is not the case that their competitors are following the same path. One such organization is Ukraine International Airlines (UIA). They also have large investments in the stock market. Although 30 years have passed since its inception, Ukraine International does not feel the need to change its uniform policy. The authorities of the organization claim that their flight attendants get a break for a long time. A statement from the company said the heels of their shoes were not that high. Rather these are made according to a certain standard.

Ukraine International is committed to upholding the old traditions of the airline industry. They believe that every company should determine its own future.

Even before Skyup Airlines, some airlines changed their traditional practices. These include Virgin Atlantic, Japan Airlines and Norwegian Air. Virgin Atlantic exempted their female staff from the rigors of makeup. They were allowed to join the work without makeup.