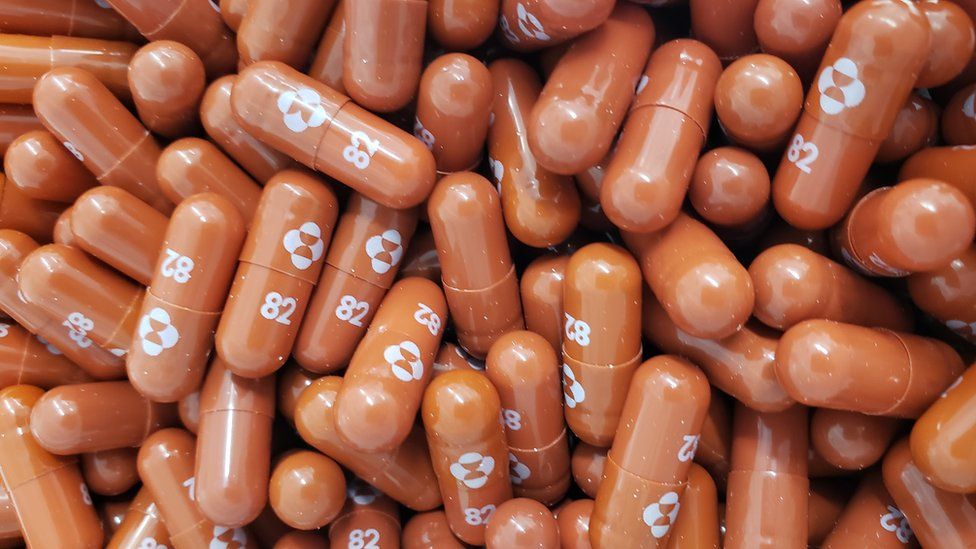 Merck and Ridgeback Biotherapeutics announced on Friday early result that indicate their experimental oral antiviral drug molnupiravir might halve the risk of death or hospitalization from Covid-19.

In a news release, the company said 7.3% of 385 patients who received the antiviral were either hospitalized or died from Covid-19, compared with 14.1% of the 377 patients who received a placebo, which does nothing.
Full data from the molnupiravir trial has not yet been released, and this data has not yet been peer-reviewed or published. But Merck says it will seek authorization from the US Food and Drug Administration, and if it’s granted, the drug could be the first antiviral treatment available orally to fight Covid-19.
“This is the most impactful result that I remember seeing of an orally available drug in the treatment of a respiratory pathogen, perhaps ever,” Dr. Scott Gottlieb, former commissioner of the US Food and Drug Administration, told CNN’s Anderson Cooper on Friday. “I think getting an oral pill that can inhibit viral replication — that can inhibit this virus — is going to be a real game changer.”
Antiviral treatments are a type of antimicrobial — treatments which kill or otherwise inhibit the development of microorganisms such as bacteria (fought by antibiotics), fungi (fought by antifungals), or, in this case, a virus.
Some of the more familiar antivirals are those developed to treat herpes, HIV and the flu.
“Most people have heard of Tamiflu, and they’ve heard of acyclovir,” said Dr. Myron Cohen, a professor of medicine, microbiology, immunology and epidemiology at the University of North Carolina. Acyclovir is a type of antiviral used to treat chickenpox, herpes and shingles. “We didn’t develop a ton of other antivirals,” he said.

Another antiviral, remdesivir, is currently the only drug approved by the FDA for the treatment of Covid-19. Remdesivir, which is made by Gilead Sciences and sold under the name Veklury, is administered by intravenous infusion, so it’s not as simple as swallowing a pill.
And remdesivir doesn’t work for all Covid-19 patients. Studies have shown mixed results; it doesn’t seem to reduce the risk of death, but it does seem to help people feel better faster, when it’s given early in an illness.
The National Institutes of Health’s Covid-19 treatment guidelines recommend remdesivir for hospitalized Covid-19 patients who need supplemental oxygen, but the World Health Organization recommends against using it outside of clinical trials.
Molnupiravir would be simpler for patients — no IV required — and it works differently, by changing the SARS-CoV-2 virus to inhibit replication.
“It actually gets incorporated into the genetic material of the of the virus and introduces errors,” Dr. Daria Hazuda, chief science officer with MSD, Merck’s label operating outside of the US and Canada, said in a briefing with the Science Media Center in the UK on Friday.
“So, over a number of incorporations, the errors make the virus less able to replicate.” Dr. Mark Denison, a virologist at the Vanderbilt Institute for Infection, Immunology, and Inflammation, said the way molnupiravir works, called mutagenesis, is what separates it from remdesivir.
“The two basic mechanisms are either chain termination, which I call the delayed stop sign, or mutagenesis, which is like blowing potholes in the road as the car is driving along. It’s just damaging the genome,” he told CNN.

What an antiviral pill could mean for Covid-19

Cohen, who has previously worked on molnupiravir, said when looking at results for an antiviral drug like molnupiravir, he wants to see three things.
“Stop progression of disease, so you take them and you forget about it, right?” he said. “The second thing we’d like the pill to do, if you’re taking it for symptomatic disease, is stop long Covid, right? It’s not just ‘Don’t let me get progressed and die — don’t let me have lingering cough, lingering headache.’ “
Cohen said his third goal would be for “treatment to serve as prevention,” so someone with Covid-19 is less likely to transmit it to others. “We’d like it to wipe out the SARS-CoV-2 replication in the nose so fast that your nose is no longer a danger to me,” he said.
Former Baltimore City Health Commissioner and CNN Medical Analyst Dr. Leana Wen told CNN on Friday that having an antiviral drug which could prevent a Covid-19 infection from becoming severe is “crucial.”
“We already have monoclonal antibodies that do this and actually are pretty effective. The problem is they require an infusion or injections. That’s really burdensome for the individual, that’s burdensome on the health care system,” she said, referring to Covid-19 treatments made by Regeneron, Eli Lilly and GlaxoSmithKline and Vir.
“It would be a total game changer if somebody, when they’re diagnosed with mild Covid, early on in their treatment are able to take a pill at home. That relieves the burden on the health care system. That also really helps the individual.”
Still, an antiviral can’t replace a vaccine. White House Covid-19 Response Coordinator Jeff Zients said during a briefing on Friday that the best way to think of such a drug is as an additional tool, to be used alongside vaccines.
“This is a potential additional tool in our toolbox to protect people from the worst outcomes of Covid,” Zients said. “I think it’s really important to remember that vaccination, as we’ve talked about today, remains far and away our best tool against Covid-19. It can prevent you from getting Covid in the first place. And we want to prevent infections, not just wait to treat them once they happen.”

What’s next for molnupiravir

There’s still a lot to learn about the drug and who it might work for. The trial detailed Friday focused on adult patients who were considered high-risk for severe Covid-19, most commonly because of obesity, older age, diabetes and heart disease. None had been vaccinated against Covid-19.
Molnupiravir is also being studied as post-exposure prophylaxis — researchers are looking at whether it can prevent spread of the virus within households, after someone has been exposed but hasn’t yet tested positive.
Merck said Friday is plans to submit an application to the FDA for emergency use authorization as soon as possible, and to other regulatory bodies around the world.
In anticipation of the trial results, the company said it has been producing molnupiravir at risk, and expects to have 10 million treatment courses available by the end of the year.
Merck has already sold 1.7 million treatment courses to the US government, if it gets authorization or approval from the FDA. The company said it will offer tiered pricing to provide access around the world, and will work with generic drug manufacturers to speed availability to low- and middle-income countries.