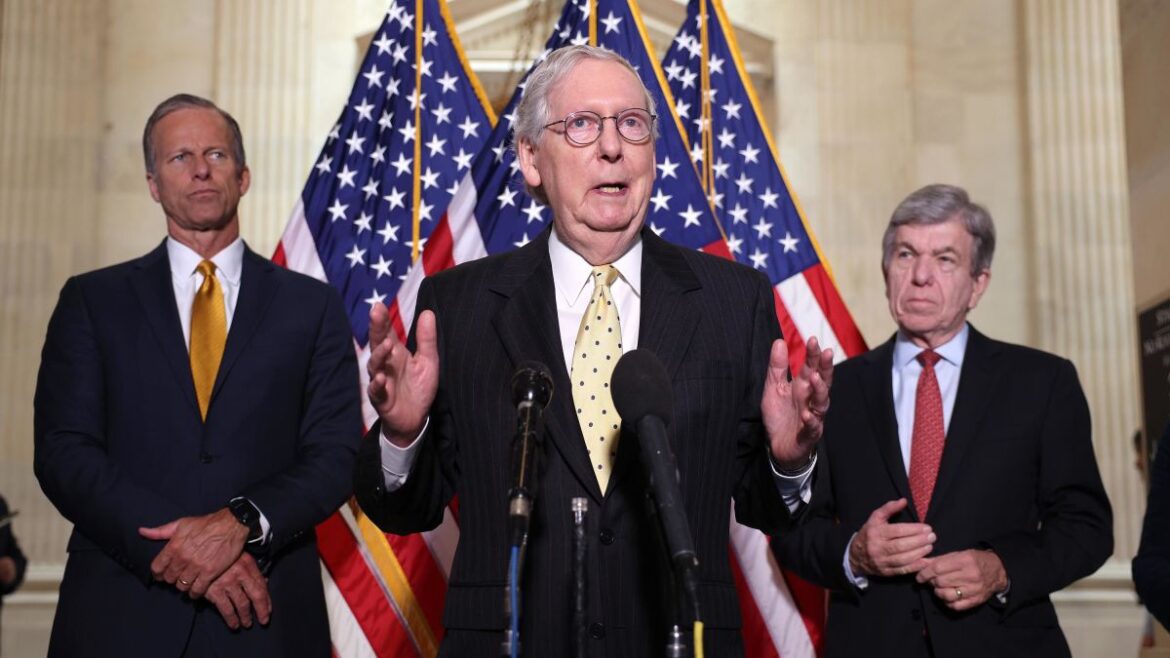 When the Senate votes Monday afternoon on legislation to fund the government and avert a catastrophic default on the debt, it is likely to be blocked by a Republican-led filibuster.

As the U.S. hurtles toward an October deadline, Republicans have taken an unusual — if not unprecedented — position.

They support the contents of the bill, with the exception of the debt limit increase. They also say the debt ceiling must be extended, yet they promise to use the 60-vote threshold power to block it. They insist Democrats do that on a partisan basis.

But top Democrats emphatically reject that. They say the debt ceiling has historically been raised on a bipartisan basis, and they won’t let Republicans off the hook this time.

Behind the high-stakes hostage standoff is a GOP desire to weaponize the issue politically.

They want Democrats to tackle the debt ceiling in a separate filibuster-proof package because, under Senate budget rules, that would require endorsing a dollar figure on how much the U.S. can borrow. It’d be high due to the accumulation of debt over generations — $30 trillion or more.

Republicans see that as fodder for attack ads in the 2022 elections, when they hope to regain control of Congress by telling voters that Democrats are on a reckless spending binge.

Sen. Rick Scott, the chairman of the GOP Senate campaign arm, told NBC News he intends to make the debt ceiling an issue in the 2022 midterms if Democrats lift it.

“They’re going to get held accountable for it,” the Florida Republican said.

Asked if the party’s campaign committee will convey that to voters in ads and other messaging, he said, “Oh, you better believe it.”

For years, Congress has avoided putting a dollar figure on the debt limit. Under the regular process that is subject to a 60-vote filibuster, Congress can simply “extend” it to a date and enable the government to borrow as much money as it needs to pay bills during that time. That was done most recently, in 2019, under former President Donald Trump.

Senate Minority Leader Mitch McConnell, R-Ky., said if Democrats “want to tax, borrow and spend historic sums of money without our input, they’ll have to raise the debt limit without our help.”

The reality is less simple. The debt limit would require an extension even if Democrats abandoned the multitrillion-dollar bill. The U.S. routinely spends more than it taxes as part of a bipartisan handshake agreement: Democrats want to spend heavily on domestic programs, and Republicans, including McConnell, insist on hefty spending for the military.

Lifting the debt ceiling does not authorize new spending. It enables the U.S. government to borrow the money that’s needed to pay bills it has already accrued.

The White House pointed to McConnell’s inconsistency from 2017, when the GOP had unified control and used the filibuster-proof budget process to pass a tax cut that raised the debt. But they didn’t raise the debt limit in that bill; they leaned on Democrats for help and received it.

“In 2017, there was an almost identical bill to fund the government in a bipartisan way, provide bipartisan disaster relief and avoid default. Republicans had total control and were using reconciliation first to try to repeal the Affordable Care Act and then pass the Trump tax cuts for the wealthy, adding $2 trillion to debt,” White House spokesman Jesse Lee said.

“Democrats joined to prevent default in good faith because economic catastrophe should not be a political football. Republicans in the Senate should just do the same now,” he said.

The debt and deficit rank low on issues that voters worry about.

A Gallup poll in August found that just 2 percent of Americans cited the federal deficit and debt as the country’s biggest problem.

The same poll said that in summer 2011, the last time Republicans engaged in debt limit brinkmanship with a Democratic president, 17 percent cited the federal budget deficit as the country’s top problem.