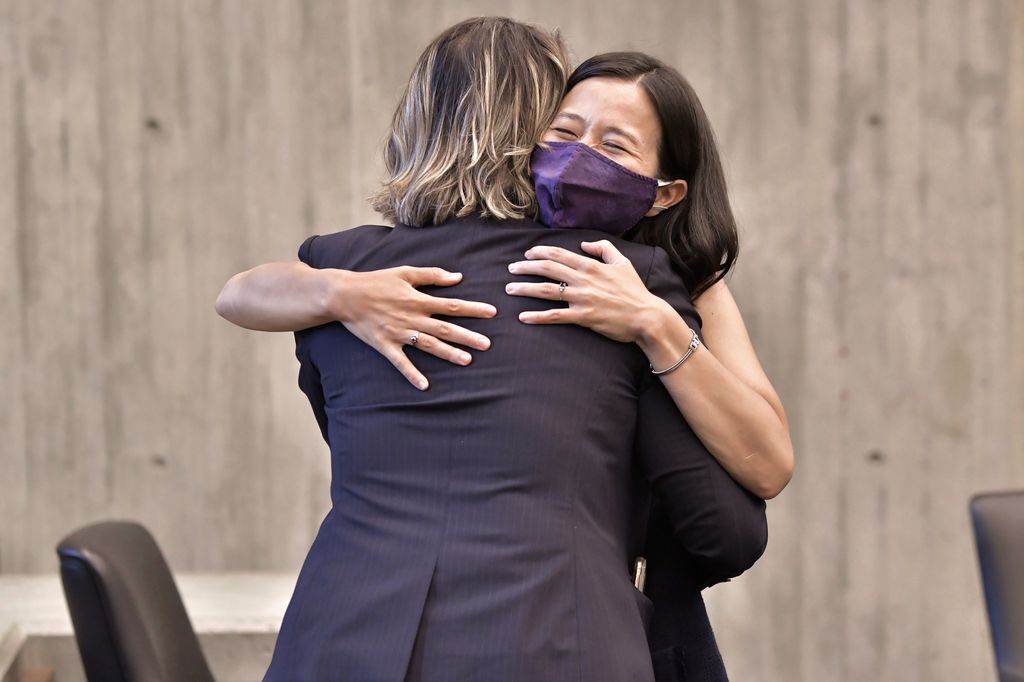 Even before the city had released its final tallies from the night before, the general election campaign for mayor of Boston started at 7:30 a.m. on Wednesday, when City Councilors Michelle Wu and Annissa Essaibi George took off across the city to court voters in a contest that, regardless of outcome, will mark a new era in Boston politics.

A city known for being parochial and slow to change will mark two firsts this November — electing a mayor who is both a woman and a person of color — after nearly 200 years of elevating exclusively white men to the office.

The two candidates are both daughters of immigrants, mothers of Boston Public Schools students, and at-large city councilors who have experience competing for votes in every Boston neighborhood. Yet they represent the two poles of the political spectrum on display in the historically diverse preliminary field, and they hit the stump Wednesday offering up dramatically different tones and visions for the city.

A progressive darling, 36-year-old Wu has outlined an ambitious agenda that includes a Green New Deal for Boston and free public transportation. Occupying a more moderate lane, 47-year-old Essaibi George sticks close to issues like public safety and potholes. While Essaibi George has courted the voters who backed former mayor Martin J. Walsh — and even escorted his mother to the polls this week — Wu boasts the support of Senator Elizabeth Warren.

Either candidate’s victory would mark a transformation for a city with a painful reputation for intolerance. But the contest between them will also test Boston’s appetite for change.

“Outside Massachusetts, Boston is seen as a liberal bastion . . . but the mayors have tended to be the lunch bucket Democrats — more traditional Boston Democrats, not Elizabeth Warren Democrats,” said David Guarino, a Democratic political strategist who did not work for any of the candidates. This race, he added, “has the potential to be a referendum on just how progressive Boston is.”

Wednesday morning was the starting gun in that ideological battle. As the city roused itself and the workday began, careful but pointed sniping between the council “sisters in service” had already begun to emerge.

Wu pitched herself as the candidate of ambitious plans — and seemed to warn that her opponent would allow the city to stagnate.

“This election is about the future of our city,” Wu told reporters outside the Forest Hills T station, her first stop of the day. “And we need to tackle the big, bold challenges to move forward and ensure that we are transforming our systems, and not sit back and wait and just nibble around the edges of the status quo.”

Essaibi George, who enters the race in second place, denied that she was the “status quo candidate” and rejected as “lazy” those who describe her as the moderate and Wu as the progressive. But she has also wasted no time trying to paint Wu as unrealistic and insufficiently focused on the nuts and bolts of the job, sketching out her argument against Wu at her Election Night party. By contrast, she is pitching herself as “a little more pragmatic than others.”

“We can say whatever we want about the challenges we face as a city, but unless it’s followed up with an action plan, with the work, and with the rolling up of the sleeves and doing it, it’s really not that bold,” Essaibi George told an early morning crowd made up of more reporters than supporters outside a diner in the South End.

“I think many of [Wu’s] plans, unfortunately, are very unrealistic. We have to make sure every day we are working towards the solutions to the challenges we face as a city. And that comes with not just bold ideas, but the action behind them.”

“The question is — Boston says it wants change; are they willing to vote for it?” Marsh said.

It remains to be seen whether Wu can buck that trend. She had a decisive advantage in Tuesday night’s returns, taking 33.4 percent of the vote to Essaibi George’s 22.5 percent. City Councilor Andrea Campbell trailed with 19.7 percent, Acting Mayor Kim Janey took 19.5 percent, and former city economic development chief John Barros got 3.2 percent.

That left the general election field without a Black candidate, a disappointment to the two Black women fighting for the spot and an outcome that, to voters eager for change, felt like a lost opportunity.

Only about a quarter of eligible voters — about 108,000 people — cast a ballot for mayor this week, a disappointing showing in a race many hoped would generate great enthusiasm. More than 113,000 voters cast ballots in the September 2013 preliminary election, the last time there was an open race for mayor, though there were fewer voters registered in Boston at the time.

To win, both candidates will need to pick up a large share of the supporters who voted for Campbell, Janey, and Barros. Wu said Wednesday that she is prepared to grow her coalition.

Responding Wednesday night to a question about whether she plans to endorse in the general election, Janey said she was not “sure what my plans will be.”

“I will be looking at the race closely, but right now my focus is on the people of Boston and ensuring a smooth transition,” she said.

The candidates’ difference in approach came across even in the venues each chose for her first events as a general election candidate.

For Wu, it was the Forest Hills T stop in Jamaica Plain, a symbolic choice for a candidate who has made a name for herself advocating for free and equitable access to public transportation for underserved neighborhoods. There, she chatted with commuters and supporters before speaking to reporters in front of City Hall.

“How did you do yesterday?” one passing transit employee joked.

Some morning commuters applauded and congratulated Wu as they headed for their buses and trains.

“We’re fans!” beamed one mother with her preschooler in a stroller.

For Essaibi George, the morning started with coffee at Mike’s City Diner in the South End and continued nearby to the intersection of Massachusetts Avenue and Melnea Cass Boulevard, the epicenter of the city’s opioid crisis. Deteriorating conditions for residents there struggling with unstable housing and addiction have become a campaign issue.

She said it was critical “to be here, to make sure that this is a part of not just the conversation, but part of what we’re talking about solutions for.”

Asked whether she sees a difference between her devotion to the issue and Wu’s, Essaibi George said she believes that “every candidate in the field, including Councilor Wu and I, have a commitment to this issue. I’ve led on this issue, though, over the last six years.”

Her supporters made the case for her on Wednesday, too.

Gene Gorman, 50, a supporter from Dorchester, said outside the diner that he has been friends with Essaibi George for decades, including when her husband coached his son in Little League.

Essaibi George has the “boots on the ground mentality” necessary for leadership at the municipal level, while Wu’s ideas are broader and perhaps too lofty, he said. And the distinctions didn’t end there.

By noon, the campaigns took a brief pause as both candidates returned to City Hall for a council meeting. Before they took up an agenda of grant authorizations and memorial resolutions, the two women embraced.