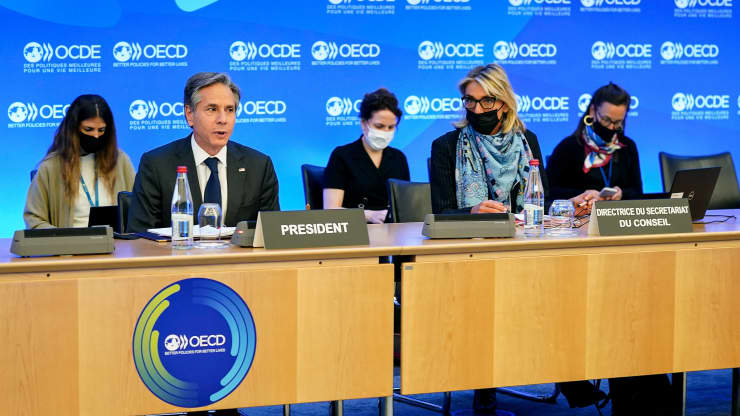 The Organization for Economic Cooperation and Development on Friday announced a major breakthrough on corporate tax rates, after years of disagreement.

The group of developed nations agreed to a global minimum corporate tax rate of 15%. This marks a huge shift for smaller economies, such as the Republic of Ireland, which have attracted international firms — to a large extent — via a lower tax rate.

“The landmark deal, agreed by 136 countries and jurisdictions representing more than 90% of global GDP, will also reallocate more than USD 125 billion of profits from around 100 of the world’s largest and most profitable MNEs to countries worldwide, ensuring that these firms pay a fair share of tax wherever they operate and generate profits,” the OECD said in a statement Friday.

The breakthrough comes after some changes were made to the original text, notably that the rate of 15% will not be increased at a later date, and that small businesses will not be hit with the new rates.

This helped Ireland — a longtime opponent of raising corporate tax rates — to get on board with the plan.

Hungary, another long-term skeptic about a global tax deal, also changed its mind after receiving reassurances there will be a lengthy implementation period.

Countries now have to work out some outstanding details so the new deal is ready to kick in during 2023.

The agreement is “a once-in-a-generation accomplishment for economic diplomacy,” U.S. Treasury Secretary Janet Yellen said in a statement.

Yellen applauded the many nations who “decided to end the race to the bottom on corporate taxation,” and expressed hope that Congress will use the reconciliation process to quickly put the deal into practice in the U.S.

“International tax policymaking is a complex issue, but the arcane language of today’s agreement belies how simple and sweeping the stakes are: When this deal is enacted, Americans will find the global economy a much easier place to land a job, earn a living, or scale a business,” Yellen’s statement said.

What is in the agreement?

The deal marks a shift in tax policy because it not only imposes a minimum corporate tax rate, but it also forces companies to pay taxes where they operate — not just where they have their headquarters.

The exact formula for working out how much companies will owe across the various jurisdictions is one detail that still needs to be finalized.

The announcement from international leaders also came about partly because of the coronavirus pandemic, which renewed a need for fairer taxation, given that governments are scrambling for new sources of funding.

When elected in 2020, President Joe Biden made it clear he wanted to tax the rich more, attempting to address inequality in the U.S.